Yep, I followed along with all the other Apple peeps and upgraded both my iPhone and iPad to iOS7 yesterday. Unlike all the media reports about the insanity of trying to perform the upgrade, I really had no issues.

Around 10 AM I upgraded my MacBook Air to MacOS 10.8.5 and iTunes 11.1 (necessary for iOS7). That took about 15 minutes. Then I started the iPhone upgrade, fully expecting a nightmare as every one else was reporting. 15 minutes later my phone was “verifying” the update with Apple. That took about 5 minutes and I was all done on the iPhone 5. Then I started the iPad Mini, that was complete within another 30 minutes.

My one complaint on this front is that I had to use a WiFi network to perform the download/upgrade, instead of AT&T’s LTE network. LTE is quite a bit faster than the WiFi network I was on, although clearly it wouldn’t have made that much difference.

I had no pain, no lost anything, no borked devices, etc. I had to figure out how to turn off background updating for apps as that was sucking the life out of my battery worse than anything else I’ve yet seen. Other than that, great upgrade, very painless and easy.

As far as whether it’s a “must have” upgrade … that depends. Do you have all Apple devices, as I do? Then the answer is unequivocally yes. As soon as Mavericks (code name for the next version of MacOS) is out, the integration between iPhone, iPad and MacBook will be significant. Already I can use Airdrop to easily move files between phone and laptop. The integration will go much deeper though .. including calendars, iBooks, Maps, iCloud Keychain and so forth.

If you are an iPhone/iPad user, but your computer is Windows based, the story isn’t compelling at all from an integration perspective. HOWEVER, you will still have iCloud keychain, iCloud improvements generally, better multi-tasking, improved folder design (I love this feature), Control Center, improved Notifications, a much better Camera app, a better Safari, iTunes Radio and a bunch of other stuff. Plus I’ve noticed that the OS is more responsive and generally feels better than iOS6.

So, like normal with Apple, there is no revolutionary change to iOS (just as there won’t be with MacOS). That said, it just keeps evolving and getting better, more stable, easier to use … and all without the frustrating changes in behavior and use cases that you see from the other guys. Nope, the device just works and does what I need to do well, no fuss, no muss.

Here’s a screenshot after the upgrade: 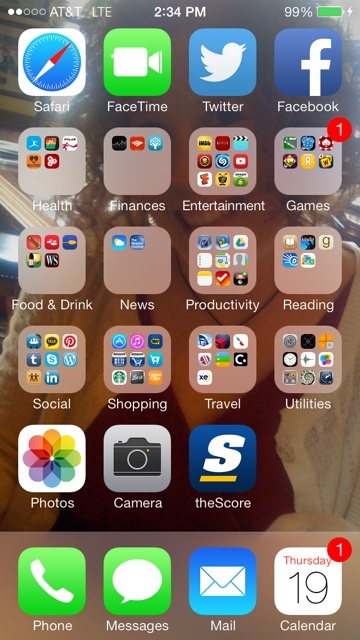 This entry was posted in Apple, BYOD, Consumer Devices, Mobility and tagged iOS7. Bookmark the permalink.

2 Responses to Upgraded to iOS7